Skip to content
Asanka Brendon Ratnayake Digging through the archive May 7, 2012August 2, 2014 3 Minutes

While killing time in Jalalabad waiting for our escort to take us to the Pakistan border, my fixer wanted to have a break & suggested we go and have some tea. Not far from our hotel was the youth park known as Zwanano Park. As customary, there weren’t any women or young girls, just young boys & old men. Large groups of men would sit on the grass conversing, while the children would be playing cricket, shoot pellet guns at balloons or fly kites.

We then came across much to my surprise a video game arcade.  Video game arcades were a preferred pastime of mine in my youth & I decided to walk in & have a play. The video game parlour was no different to any other parlour in the  world, pool tables near the entrance surrounded by the local pool sharks, a guy in his late teens at the counter juggling loose coins, onlookers peering over the shoulders of the players but above all young boys transfixed by the images on the screen as they punish the controls like a heavyweight boxer.

Kids were playing a wide array of game ranging from Donkey Kong, Sonic the Hedgehog, Street Fighter but by far the most popular game was Grand Theft Auto. 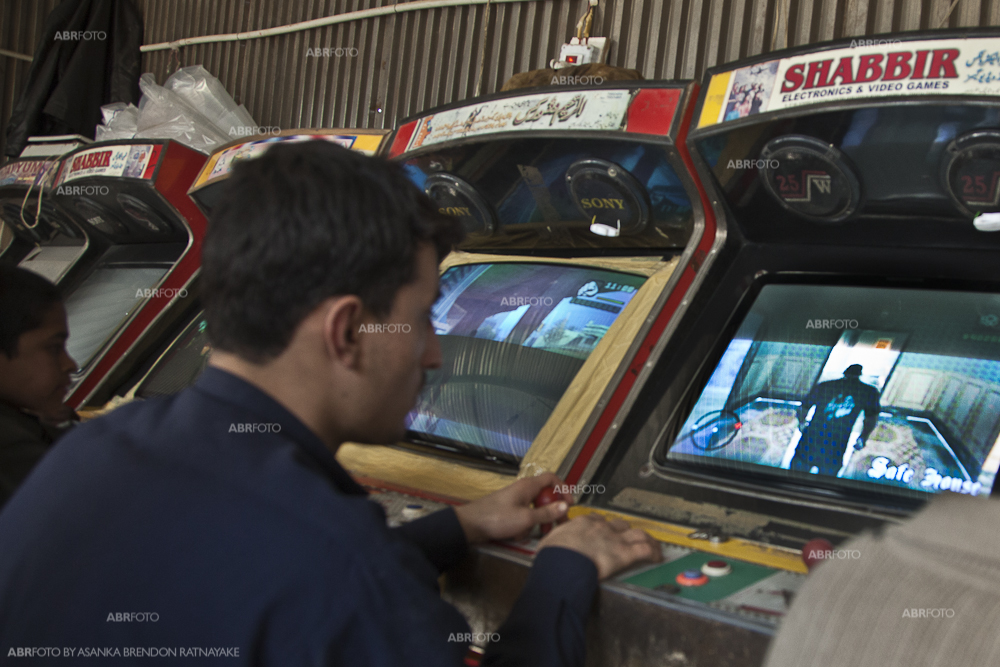 Now for those unfamiliar, Grand Theft Auto commonly known as ‘GTA’ is a highly acclaimed & very popular video game franchise that has gained it’s fair share of controversy over the years with both lawmakers & conservatives. Its garnered notoriety for the fact you have to kill civilians, commit crimes such as car jackings & peddle drugs to succeed, all while the game glorifies American gang culture. If there was a video game that symbolised American freedoms this is it, it’s a game which pushes the social & moral boundaries, it features all the vices & sins so vigorously deplored upon by groups such as the Taliban. Grand Theft Auto is to video games as ‘Gansta Rap’ was to music during the late 80’s; it was brash, controversial but embraced by the youth much to the displeasure of family groups & the establishment, yet no one could stop it. So in that respect maybe i shouldn’t have been so surprised to see a once repressed youth happily shooting villains & driving over bad guys while dropping off a kilo of cocaine to the mob boss in Grand Theft Auto San Andreas.

I think what surprised me was how quickly things had changed, it had been only 8 years prior that the Taliban roamed the streets of Jalalabad & would severely punish a young boy for as much as flying a kite or listening to music.  Walking out of that parlour my fixer asked what I thought was so funny, I tried to explain the irony of it all & that these kids playing Grand Theft Auto is quite symbolic in terms of how far his country had come even amongst the backdrop of war, I don’t think he understood but he laughed anyway & that was fine, at the end of the day its all just fun & games…

These images have come from my photo essay titled ‘ Beyond the conflict’, which can be viewed on my website here http://abrfoto.photoshelter.com/gallery-slideshow/G0000ZZ23bNCP_gM/C0000D202HshoVU4?start=

I hope you enjoyed the first of what i hope will be a fortnightly post under the ‘Digging through the Archives’ section of my blog. I intend to pull up old images of mine which may or may not have been seen much publicly but have a interesting story behind them. If you seen any images of mine that you’d like me to discuss, feel free to let me know & i’ll talk about it.

Australian Melbourne based Photojournalist. Asanka specialising in Photojournalism, Reportage, Documentary, Travel & Sports Photography. He works with some of the largest news services and publications in the world. His folio can be viewed at www.abrfoto.com View all posts by Asanka Brendon Ratnayake