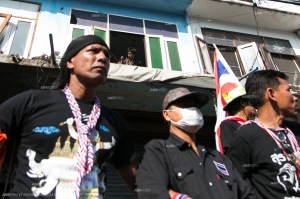 An Anti-Government protesters about to exit a window allegedly housing the suspect whom threw an explosive device injuring 30 people during an anti-government street rally on January 17, 2014 in Bangkok, Thailand

Australian Melbourne based Photojournalist. Asanka specialising in Photojournalism, Reportage, Documentary, Travel & Sports Photography. He works with some of the largest news services and publications in the world. His folio can be viewed at www.abrfoto.com View all posts by Asanka Brendon Ratnayake